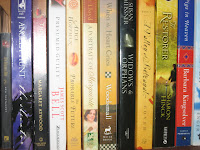 Some writer friends and I were chatting about epigraphs this week (those are the poignant and pithy quotes authors like to put in the front of their books). Epigraphs are supposed to clue you in to the theme of the book. They are like little secrets the author whispers into your ear before you turn to Chapter One. They reveal a wondrous truth the protagonist will need 400 pages to figure out. They are lovely little things and I really like them. I always include one or two. The word epigraph is Greek and means “written upon.”

The conversation reminded me, though, that there have been times I’ve read an epigraph and been left flummoxed. The whispered secret made no sense to me.

What does it mean? What was I supposed to get from those solitary, standalone words? Something important is imbedded here! Dang it, what is it?? So I’d read the entire book and then turn back to the epigraph, hoping to have been enlightened. But I’d be as befuddled as before. That ever happen to you? Tell me it has. I can’t be the only person who’s been mystifed by an epigraph. . . I wanted to make a list here on the Edge of all the epigraphs that have stymied me and I couldn’t remember a one. Not one.

So I’m going to start making a list. When I come across an epigraph that floors me, I’ll add it to the list. When the list is adequate, I’ll post it. It will probably appear five years from now, give or take.

In the meantime, here are some epigraphs from books I really like and whose epigraphs I totally get. The epigraph precedes the book it is found in:

“Lawyers, I suppose, were children once.” – Charles Lamb
To Kill a Mockingbird by Harper Lee

“One must take off her fear like clothing. One must travel at night; this is the seeking after God.” – Maureen Morehead
Ahab’s Wife by Sena Jeter Naslund

“What power has love but forgiveness? In other words, by its intervention, what has been done can be undone. What good is it otherwise?” – William Carlos Williams
Levi’s Will by W. Dale Cramer

“Today, like every other day, we wake up empty and frightened. Don’t open the door to the study and begin reading. Take down the dulcimer.” – Rumi
The Year of Pleasures by Elizabeth Berg

“No one spoke. The host, the guest, the white chrysanthemums.” – Ryota
The Samurai’s Garden by Gail Tsukiyama.

Got a favorite epigraph? Or one that has you perplexed? Let’s hear ’em . . .

« Letting the flavors mingle
Who decides the dreams? »