The last time I will read this book… 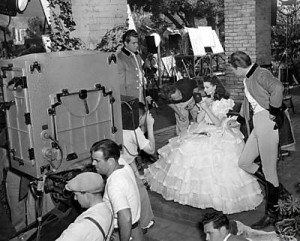 The new book takes place on the set of Gone With the Wind in 1939.

After many long months researching, then writing, then revising, then editing STARS OVER SUNSET BOULEVARD, the galleys are here at my house, which means this will be the last time I read this book that I love so much. After this last pass with the pages, I will sign off on it, as will my editor and the production staff and the next thing you know, the book will be printed and the warehouse will be waiting for the turn of the calendar page to start shipping it off in January. I seriously doubt I will ever read it again.

Does that surprise you?

I was talking to a friend the other day and I told her that I don’t read my books after they are published and she was amazed. Why not? she said. I could only shrug and say that I don’t really know other than I’ve already read the book a dozen times by its release date, and that it’s hard to read it after publication and be totally okay with it. I am thinking there would be too many little things I would do differently, change up, change back. Change.

Once you release a printed book into the wild, it really does feel like it’s now out of your hands. An electronic file can be amended now and then; if I really wanted to change something in the one book I have on Kindle Direct Publishing, I could. But that just seems weird to me; to be continually revising a printed novel that has already been released into its own time and space. A work of non-fiction, like a textbook or a how-to or self-help, can and most likely should be revised, as the pertinent facts and figures change. But a story is a story.  Wouldn’t it be odd if Ernest Hemingway could somehow revise A FAREWELL TO ARMS from beyond the grave? If he could, and he did, I’d read it and probably be irked. Because it wouldn’t be the story I read way back when he first released it. 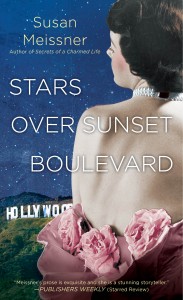 Were I to read a book of mine after the ink is dry I might love it less, promote it less ardently, worry more over what I could have done, should have done. It’s been said that a poet never finishes a poem. There’s just comes a point when he or she must abandon it.  It’s the same with novels, especially when you are on a contracted deadline. The day comes when you just have to say, “It’s done.”

I think it’s probably wise that we authors don’t routinely read our books after publication; at least I think I am in the majority here. I would love to hear what fellow authors think and do.  I don’t know what there is to be gained by re-reading one, unless I couldn’t remember its details. But that has never happened to me.

So what do you all think? Fellow writers, what do you do? Readers, what is your take on this? I would love to hear from you!

Why I love the Times Square Kiss

It’s one of the most iconic photos ever taken of a kiss, and arguably of the unspeakable joy that falls across a nation when a time of war and suffering has ended. It’s been featured on greeting cards and calendars and coffee mugs and tote bags. Replicas in statue are everywhere, including in my own hometown of San Diego. It’s the VJ Day Times Square Kiss, of course, which one American sailor planted on one American nurse on this day, seventy years ago. Japan surrendered to the Allies on Aug 14th, 1945.  Truman announced the surrender here:

I love this kiss for all kinds of reasons, and therefore I don’t like it when naysayers theorize it was staged or that it happened before the announcement that World War II was finally and at last, over.

For a long time there was much speculation about when photographer Alfred Eisenstaedt snapped it or who the subjects were. This linked article, which appeared today in Wired, says that in a book called The Kissing Sailor, it’s believed the sailor is George Mendonsa and that dental assistant Greta Zimmer is the nurse. But dozens of other people have apparently also claimed to be the kissing couple. And Eisenstaedt didn’t identify his subjects. He also didn’t record what time he took the photo, so that’s always been an arguing point, too. But no longer. 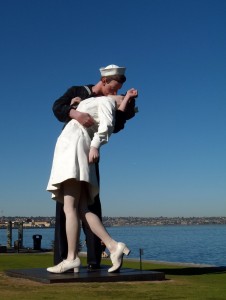 The photo in statue form in San Diego.

A physicist, an astrophysicist and an astronomer who were teamed together for four years have concluded the photo was taken at 5:51 p.m. The Wired article states this trio made a “meticulous study of vintage maps, aerial photos, and blueprints before building a scale model of buildings. Based upon the lighting and shadows and the position of the sun—more on this in a moment—they are quite confident in their findings.”

Truman made his historic announcement at the White House at 10 p.m. But according to George Mendonsa, he and his girlfriend – not the nurse by the way! – were at Radio City Music Hall near Times Square for a 1:05 p.m. showing of “A Bell for Adano,” but they never saw the end of the film. The house lights came on and the movie was stopped mid-reel. There was pounding on the doors from outside the hall. The streets were alive with the news that Japan had surrendered. George and his date and thousands of others swarmed the Square in jubilation. He kissed the first nurse he saw because of all that he had seen. The war in the Pacific, where he had just come from, had been hell.

I like the idea that this photo was a spontaneous reaction to the best news ever. I like it that the sailor and the nurse probably didn’t know each other. (If it’s George, they didn’t). I like the bend in her body, and how his fingers are still loosely curled into a fist – an echo of the military effort and sacrifice made by American servicemen and women. I like it that her leg has popped in what for me will always be, since The Princess Diaries, a foot-popping kiss. It’s a black and white photo. The nurse in white is a healer, a reliever of pain, an emblem of humanity’s compassionate side. The sailor in black tones is a metaphor for might and bravery and the terrible duty that befalls a nation that must go to war to defend its freedom and the freedom of others. Sometimes we must take up arms. It is always a joy to lay them down again.

I like it that they are in uniform. This is a picture of two people who took on responsibility in the service of others. They won’t always be in uniform, but on this day they were.

And I like the faces of those who are watching them.

I guess all that’s to say I don’t need to know all the particulars; I am content with limited facts and my own imagination. Sometimes it’s better to enjoy the magic and not worry so much about how the rabbit got into the hat.

Echoes of the Past 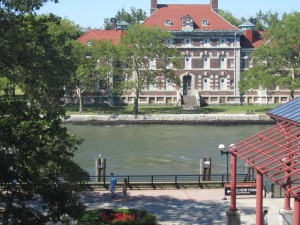 A view of the main hospital from the immigration building.

Two years ago when I was in the final stages of writing A Fall of Marigolds, I planned a trip to Ellis Island to see for myself the hospital buildings where I set the story and which have been unused for more than fifty years. They weren’t open to the public then and I was going to be given a private and guided close-up look for research purposes. I had my plane ticket, a hotel room booked, even a reservation on the ferry all set up, but Hurricane Sandy swept in a little less than a month before I was to arrive. Ellis was one of the places that the storm hit hard. The damage to the landing docks was extensive and Ellis would end up being closed for repairs for more than a year. I still went to Manhattan. I met with my editor, took photos of the Upper West side to find the best spot for my fictional Heirloom Yard fabric store, went to the 9-11 Memorial, touched the building that had been the site of the Triangle Shirtwaist Fire, looked out over the river toward the island and the hospital buildings, and hoped there would be another time, some day, when I could walk the halls that Clara walked.

This past week, I finally got my wish. On Friday I finally got to see and touch and feel the hospital buildings that served as the detail-rich setting for this book. This part of Ellis is open now to hard hat tours by reservation only. I highly recommend the tour if you are a history devotee, if you enjoyed A Fall of Marigolds, and especially if you wish to join in the effort to preserve the buildings. They are crumbling into ruin as old buildings do if they are left on their own to time and the elements. Proceeds from the tours go to the Save Ellis Island effort. It’s also easy to donate toward the preservation campaign on their website. I send a small portion of the royalties from A Fall of Marigolds to assist in this endeavor.

The primary photo you see above, is the reflected view of the Statue of Liberty, visible from a mirror above a sink in a room in an isolation ward. The terrible irony here is that the patient whose room this was, was likely a third-class TB patient who would never be allowed to immigrate while infected with tuberculosis. He or she would be stabilized until healthy enough to make the journey back to where they came from… 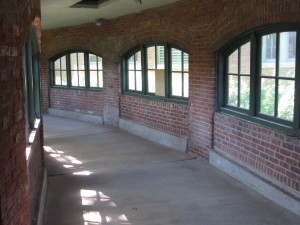 One of several curved hallways in the contagious ward. Curves, so it was believed, kept bad air from settling in the corners. 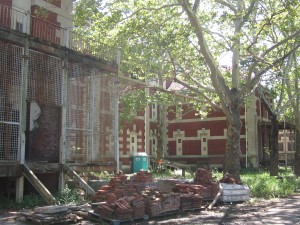 The caged area was where those with supposed mental illness could get some fresh air during their stay. The mentally ill – diagnosed back then as imbecile, idiot or moron – would sadly be sent back to where they came from as it was believed they would become a burden to society. Only those who could work and make their own way in life were allowed to emigrate. 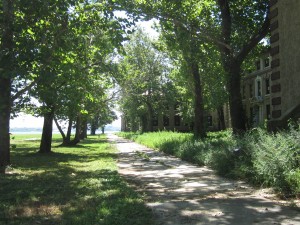 During the hospital’s golden years in the early 1900s prior to 1930, the lawns and landscaping were professionally cared for. After the buildings were abandoned in the late 1950s, trees overtook the empty spaces and their limbs broke more windows than vandals and heavy storms. 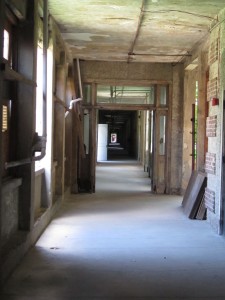 A hallway in the contagious wards. Clara walked down it many times… 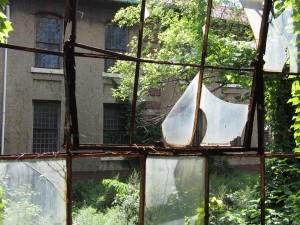 Many of the window openings have been covered to keep out the elements. But not this one. 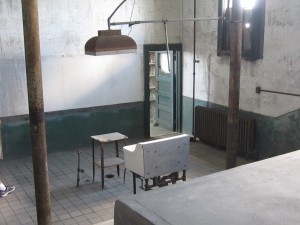 Being a public hospital, it was also a teaching hospital. This was the autopsy theater. 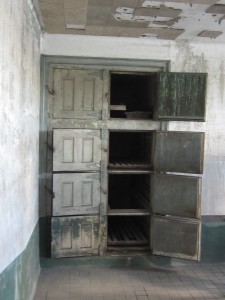 Unfortunately not everyone admitted to the Ellis Island Hospital could be cured. Hence, the morgue. The top two shelves would be packed with ice. 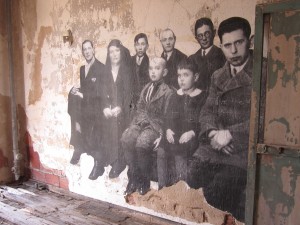 A haunting artistic display is currently on exhibit at Ellis. A French photographer has placed many of these images in different places. You can see more of this exhibit on the website linked above. 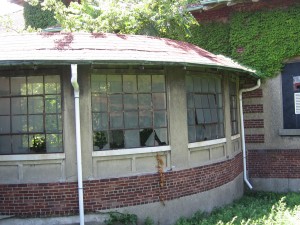 This is Ward K, where I put fictional Andrew, who wore the scarf around his neck on the day Clara met him… 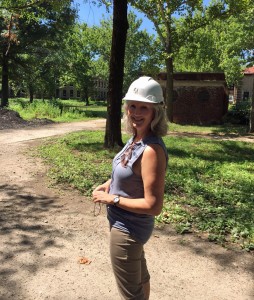 Me in my hard hat!