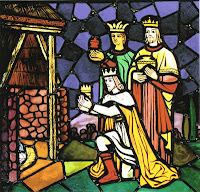 You know, sometimes when something you’ve long believed to be true turns out to not be true or subject to speculation, it makes you feel like the world is a bit wobbly.

I didn’t like it when Pluto was deemed a planet no longer (though it will always be a planet to me) and I remember being bummed as a youngster when I realized the Partridge Family kids (aside from David Cassidy and Shirley Jones) didn’t really sing and they didn’t play any instruments and weren’t even really very good at lip sync. I liked it when I thought they were wildly talented. I don’t like being surprised that a long held belief is as flimsy as gossamer.

So if you don’t want to hear something wobbly about the three Wise Men, read no further. If you do read on, remember I warned you.

I’ve known for quite awhile that the Magi were never at the manger, that they came later. The Bible makes it clear that when the Wise Men arrived in Bethlehem, they found Jesus the Child (not the infant) in a house. And when Herod decreed one of the more heinous acts in history, the age range of doomed boys was two years old and under. Jesus was probably a toddler of sorts when the Magi arrived. If you didn’t know this already, it’s time you did. But honestly, you can keep your Wise Men in your nativity scene if you want to. You don’t have to put the manger scene on the coffee table and the wise men in yonder corner of the living room.

But here’s something I just realized when I was doing a little research for some curriculum I am writing.

But the gospels don’t say there were three.

It’s not like it really matters. But wow it feels wobbly not to know.

So I’m not even going to tell you that there is no indication the Bethlehem star hung in the sky like a Hollywood flood light. No one probably noticed it except the three or six or ten Wise Men who were trained in astronomy – among other things. A star as big as the one we like to imagine would have been visible from the North Pole. And Herod wouldn’t have had to ask where the Child was because he would’ve seen the beacon himself.

But like I said. I’m not going to tell you that, either. Things are wobbly enough as it is. . .