Time is a slippery thing… 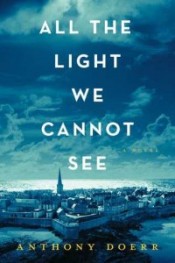 I’ve a fondness for stories about ordinary people facing the extraordinary crucible that was World War II. Some of the novels that have left the biggest impression on me have been set in this time period; which is perhaps why my next novel, out in February has as its primary setting London in 1940.  All the Light We Cannot See by Anthony Doerr may well be my new favorite. 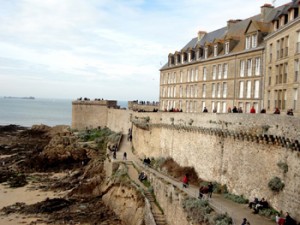 Marie Laure, blind since she was six, lives with her father in Paris, where he is keeper of the locks at the Museum of Natural History in Paris. Her father builds her a model of their neighborhood so that can memorize it with her fingers and navigate the real streets with her cane. But when the Germans occupy Paris, Marie and father flee to the home of a great-uncle on the Brittany coast and her father builds a new model village of their temporary home in St. Malo. Meanwhile in Germany, an orphan named Werner becomes adept at building and fixing radios, earning him a place at a military academy to train young Nazi soldiers, and eventually a skilled hunter of Resistance fighters.

The composition of this novel in short, alternating chapters that were sometimes interspersed with obvious interludes from the coming finale, was masterful. I couldn’t wait for the day to end so that I could crawl into bed with it and read before turning in.

When I wasn’t reading it, I was thinking on it. It’s that kind of book. Hauntingly sad and yet beautiful. I’ve read a number of World War II books that still resonate with me long after I’ve read them – books like Life After Life by Kate Atkinson, The Secret Keeper by Kate Morton, Those Who Save Us by Jenna Blum, Stones From the River by Ursula Hegy, and Sarah’s Key by Tatiana de Rosnay. ALL THE LIGHT WE CANNOT SEE is definitely in the company of these other books. Not every novel about war can leave you feeling completely satisfied – it’s war – but I can say that this book left me breathless with its stellar and intoxicating prose.

Here are a few quotes to leave you with:

“Time is a slippery thing: lose hold of it once, and its string might sail out of your hands forever.”

“We rise again in the grass. In the flowers. In songs.”

“A line comes back to Marie-Laure from Jules Verne: Science, my lad, is made up of mistakes, but they are mistakes which it is useful to make, because they lead little by little to the truth.”

“To really touch something, she is learning—the bark of a sycamore tree in the gardens; a pinned stag beetle in the Department of Etymology; the exquisitely polished interior of a scallop shell in Dr. Geffard’s workshop—is to love it.”

« A new look coming your way
Want to be on the Secrets Deam Tream? »