Stages of the cross 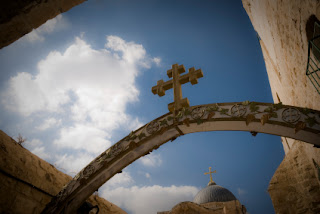 In the fall of 1989, my husband and I took a trip to the bit of earth and air where our faith begins. We boarded a plane at Heathrow and flew as far East as I have ever been – to Israel.  Over the next nine days we stood on the shores of the Sea of Galilee, broke bread on an ancient hilltop, touched the gilded floor where it is said a manger once rested, pondered the gnarled – nearly pained -olive trees in a garden still called Gethsemane and walked the Way of Suffering. Some call a trip like that a pilgrimage. But to be honest, I didn’t feel like a pilgrim, especially on that day we walked the Via Dolorosa. I felt more like the inquisitive child desperate to know how the magician can make a white dove appear out of nowhere.
The child is mesmerized, transfixed by the notion that something can appear in a blink of of an eye where nothing was. It defies what she knows of the world. She wants to know how it can be done. She is a child learning about her world and this is how she learns, by exposure to truth. It is how she learned the stove is hot, knives are sharp, and what goes up comes down.
So as I walked the Way of Suffering, the closest one can get to the physical truth of the Cross of Christ, I was the child desperate to know how it works. Was there no other way to save me? Really? No other way?
A pilgrim probably does not ask a question like that. But a child does.
And the simple answer – that is not simple at all – is, no there wasn’t. Jesus asked the same question in that grove of hideously twisted olive trees. Is there another way?
No.
And so He went the way of the Cross.
The child in me still ponders this. Not that there was no other way but that He went.  This is what makes a Friday like today, good. It doesn’t seem good, not to the child. She wants to wrap her mind around it. But there are some things a child cannot fully understand. She cannot explain why the stove is hot, but she simply must accept that it is.  There are stages to her understanding. There always will be. . .
“We may say that on the first Good Friday afternoon was completed that great act by which light conquered darkness and goodness conquered sin. That is the wonder of our Saviour’s crucifixion. There have been victories all over the world, but wherever we look for the victor we expect to find him with his heel upon the neck of the vanquished. The wonder of Good Friday is that the victor lies vanquished by the vanquished one. We have to look deeper into the very heart and essence of things before we can see how real the victory is that thus hides itself under the guise of defeat.”

« Tribute to a Good Dog
Three Cups of Disappointment »