New from Lisa Wingate & a giveaway 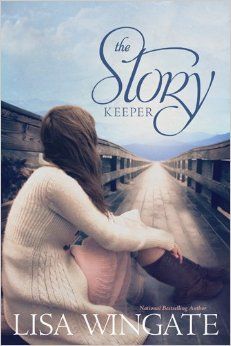 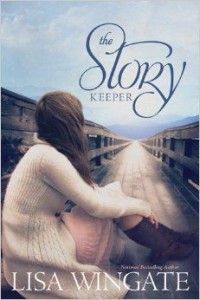 It is my distinct pleasure to welcome my dear friend Lisa Wingate to the blog today to celebrate and chat about her new book, The Story Keeper. Lisa is a gifted storyteller, so believe me when I say you will want to read to the end to see how you can be in on the drawing for a signed copy of this wonderful book. Lisa’s books have held positions on many bestseller lists, both in the U.S. and internationally. She is a seven-time ACFW Carol award nominee, a Christy Award nominee, an Oklahoma Book Award finalist, a Christianity Today Book Award nominee, an Inspy Award nominee, a two-time Carol Award winner, among others. Lisa can be found on her website and also as a regular contributer to the SouthernBelleView Daily blog. And now for the chat!

Lisa, every book has something for us in the way of a lesson. “The Story Keeper” is a powerful tale. What are the lessons behind the book?

In many ways, The Story Keeper is an examination of self-identity. It’s about the many masks we wear, where those masks come from, and whether we can leave them behind and become fully authentic. So often, in rejecting the roles our childhood experiences have taught us, we only put on other masks. In the story, Jen believes she has left behind the girl who was raised in poverty in Appalachia and forced to comply with the harsh and cultish practices of the tiny Church Of The Brethren Saints. But in reality, even hundreds of miles away in New York city working her dream job as an editor, Jen’s in hiding from her past and all the painful questions of her childhood.

When she discovers the partial manuscript of The Story Keeper on her desk, she comes face-to-face with the tale of a young girl living a similar life over 100 years ago. That discovery breaches the mask. What Jen really finds in that manuscript isn’t the story of a 16-year-old Melungeon girl trapped in Appalachia at the turn of the century; it’s her own story. That’s why Jen is compelled to go back to the Blue Ridge Mountains in search of the rest of the story. She’s looking for her own truth, for the self she abandoned due to the wounds of her childhood.

The Appalachian setting becomes almost a character in the book. Why did you set the book there? 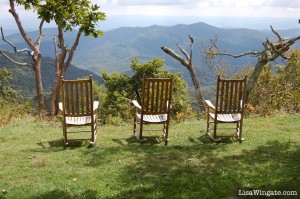 Appalachia is a place where the air fairly whispers with stories. So much of the world has grown too fast paced these days, too busy for sitting and listening, too preoccupied with the future to devote effort to retelling the past. But in Appalachian culture, there’s still a reverence for it. There are still storytellers who can entertain a crowd at a ramshackle café, on a back porch or at the kitchen table over coffee. That tradition of the passing down of stories is part of The Story Keeper.

Appalachia is filled with mist and mystery. It lends mood to a story. The mountains are dotted with isolated communities where people can live differently, undisturbed by outsiders. It’s also the place where mysterious “little races” like the Melungeons lived historically, and in some cases still do. I knew that the historical tale of Sarra would have to do with her Melungeon blood and the myths, legends and prejudices that sort of heritage would bring. Even today, the heritage of “blue-eyed Indians” discovered in the Appalachians by the first English and French explorers remains a mystery. What were the origins of their Caucasian blood? Were they descendants of shipwrecked sailors? Journeying Norsemen or Turks? The progeny of the Lost Colonists who vanished from Roanoke Island without a trace, decades before the Pilgrims landed on Plymouth Rock? The mystery fascinated me, and it pulled the story from me, and yes, the place became a character in itself in the book.

This new novel tells a story within a story, as did your last novel in the series, The Prayer Box. These are my favorite kinds of stories to read – and to write! Do you find dual-time frame novels a challenge to write?

It’s always a challenge to balance dual time frames and a story within a story. It falls in the category of double-the-work and double-the-risk, but also double-the-fascination and double-the-reward. There’s twice as much research, but in doubling the research, you also discover twice as many interesting historical facts, unanswered questions, and nearly-forgotten bits of history. Those things weave new threads into the story loom. For me, the biggest challenge was balancing the two stories, ensuring that both would be fully satisfying, and that the historical story would serve a purpose in modern-day characters’ lives. 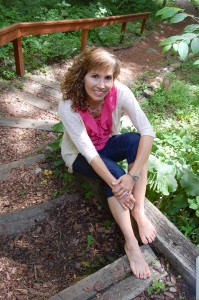 I’ve always loved to write, but I didn’t get serious about freelance writing and selling until after I’d graduated college, married, and started a family. I wrote and sold various smaller projects in between naps, diapers, and playgroups. And when the boys were older, during soccer practices, in carpool lines, while helping with homework, and in all sorts of other situations.

People often ask me if I need quiet in order to write. With boys in the house, if I’d waited for quiet, the writing would never have happened. I learned to lose myself in a story amid the noise of life and I loved it that way. I asked myself what makes a story last, what really makes a story worth telling and worth reading? I wanted to write books that meant something, that explore the human soul.

One day, I came across a notebook in which I’d written some of my grandmother’s stories. I’d never known quite what to do with those stories, but I knew they were significant in my life. When I rediscovered the notebook, I had the idea of combining my grandmother’s real stories with a fictional family who is like and unlike my own family. That little germ of an idea became my first women’s fiction novel, Tending Roses.

Now that the boys are grown and the house is quiet, I’m redefining the writing routine again. Just as in books, life is a series of scenes and sequels, beginnings and endings, and new discoveries.

Can you give us a sample from the first page of the book?

The thought fell quietly into place, like a photographer’s backdrop unfurling behind the subject of a portrait. Its shimmering folds caught my attention, bringing to mind a bit of advice from Wilda Culp, the person without whom I would’ve ended up somewhere completely different. Someplace tragic.

It’s strange how one person and a handful of stories can alter a life. 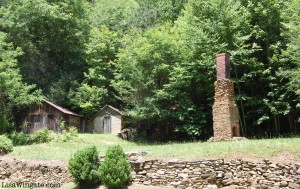 The trick, Jennia Beth Gibbs, is to turn your face to the glory hours as they come. I heard it again, her deep-raspy Carolina drawl playing the unexpected music of a bygone day. The saddest thing in life is to see them only as they flit away.

My first afternoon in the war room at Vida House Publishing was a glory hour. I felt it, had an inexplicable knowing of it, even before George Vida shuffled in the door and took his place at the head of the table to begin the weekly pub board meeting—my first at Vida House. This meeting would be different from all other such gatherings I’d attended over the past ten years at a half-dozen companies, in a half-dozen skyscrapers, in and about Manhattan.

There was magic in the air here.

George Vida braced his hands on the table before taking his seat, his gaze strafing the room with the discernment of a leathery old goat sniffing for something to nibble on. His survey paused momentarily on the pile of aging envelopes, manuscript boxes, and rubber-band-wrapped papers at the far end of the conference room. The odd conglomeration, among so many other things, was Vida House’s claim to fame—a curiosity I’d only heard about until today. One of the few remaining actual slush piles in all of New York City, perhaps in all of publishing. In the age of e-mail communication, paper-and-print slush piles had quietly gone the way of the dinosaurs…

Delish! Readers, for a chance to win a signed copy of The Story Keeper, just leave a comment below by answering this question: Have you ever been in a place that seemed to whisper stories, like Lisa said of the Appalachians? Tell us where! Those that answer will have their names put in a hat and random.org will draw a winner at 10 AM Pacific on Sept. 12. Good luck and I can’t wait to hear your places. Mine is Ellis Island….

« Driftwood Tides by Gina Holmes
Not your average mystery »