Time for some new carpet 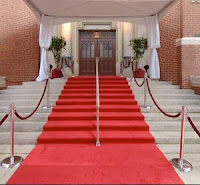 I admit I am a little disappointed the writers’ strike is still going on. And I am sad that there are writers who want to be writing but are not.

But I am also sad that my writing colleagues in the film industry currently earn less than a nickel on a DVD sale. It’s incredible, really. The DVD you buy for $17? The writer gets something in the neighborhood of four cents. That’s just not right. So I understand why they are on strike.

And yet I am itching for the impasse to pass. I’d like The Office to come back and I’d like a full season of Lost. And I would have watched the Golden Globes had the ceremony aired but I am not overly disappointed there was no red carpet yesterday. The awards were still given. Talent was still recognized; just with less fanfare.

But it appears there are some who were greatly distressed by what didn’t take place last night. And it had nothing to do with writers and actors and directors. It had nothing to do with the art of filmmaking at all. It had to do with fashion. There was no runway show last night. No one was showing off their evening gowns or jewels or coiffures. There was no red carpet to woo us into thinking big award ceremonies are about clothes, not artistic talent.

I happened upon a countdown to the Golden Globes show where nameless commentators in ties and spaghetti straps tried to convince themselves and their audience that they were having a lovely, engaging time waiting for the press conference to start even though there were no celebs to chat with and no dresses to admire or ridicule. They kept saying “We’re still having a good time here!” which makes you think they aren’t. And which certainly makes you think the GG awards are really a front for a fashion show.

Actually, Hollywood news teams had a chance to delve deep into what makes a movie memorable, what turns words on a page into story, what compels us to care about characters who aren’t real. But from what I saw, they just yakked about what makes an award ceremony boring. No stars. No gowns. No red carpet.

Well. Maybe it’s time to nix the carpet, have next year’s ceremony at Yellowstone and tell everyone to wears jeans and a sweatshirt.

But then I suppose it be all about who’s wearing whose jeans. . . And what kind of SUV they drove to get there. . .

« Wilson is alive and well
Truce and consequences »