The many splendored thing 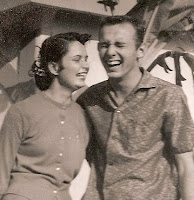 I did what I said in my last post I was going to do.

I took my characters in my current manuscript to the valley of decision, plopped them down in the middle of The Pivotal Moment, and left them to marinate there for the weekend.
Had to celebrate my parents’ 50th wedding anniversary.
They weren’t invited, my characters, though they jockeyed for position to ride shotgun on the way to the party. I told them, “No. Sorry. You have to stay here and think about where you’re at right now and how you got there.”
“You put us here,” they whined.
“I will bring you some cake,” I said. “Really good cake. Bavarian cream.”
They acquiesed.
And I had a lovely time and didn’t think about them at all. 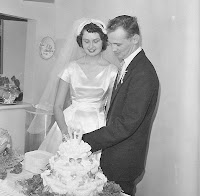 My parents, Bill and Judy, (top photo was taken while they were still dating) were married Aug 8, 1958. Don’t you just love the 50’s? Cars were cool, the music was cool, clothes were cool. I love my parents’ wedding pictures. I can just feel the hopeful optimism in those deep black and white tones. It seems like the last decade before the world became a different place. Less optimistic, maybe? Less simple. Less genteel.
Just think of the decades anyone married 50 years has had to wrap their wits around. The rebel 60s, the culturally bankrupt 70s, the big hair-big glasses 80s, the it’s-all-about-me 90s and the techno 00s. I salute my parents on every front for meeting each decade, as it swept them up in it, with grace and humor. 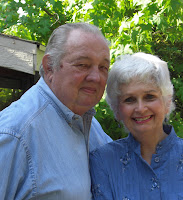 Paul Sweeny once said, “A wedding anniversary is the celebration of love, trust, partnership, tolerance and tenacity. The order varies for any given year.” That’s what makes the 50th anniversary golden, eh? It celebrates the marriage that has been refined, like gold, in the fires that have made it strong and beautiful.
Happy Anniversary, Mom and Dad! Shine on. . .

« Fog of Olympic-sized proportions
If dogs could write »