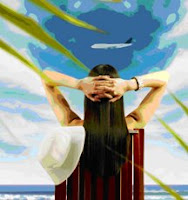 There they go. Flying off to some sunny vacation spot, free from inner turmoil – or at least free from having to think about anything more intense than cream or no cream in their java.

I finished a book this weekend. Closed the Word file. Sent it off to my editor. Emerged from the cave where my cast of troubled characters have held me bound.

We’ve been through a lot together the last few months. There were times when I wanted to vaporize these people, times I wanted to take them out for fish tacos (that’s a good thing, amigos) and times I wanted to break out the magic wand and tap their problems to oblivion with just a flick of the wrist.

In the end, no pun intended, I crafted for them – and for the future reader – a resolution I hope is believable, satisfying and cheeseless. The characters seemed happy with it. They know I’ve left them in a place where they can still mess it all up if they choose to. That’s part of the Edenic nature, too, isn’t it?

And so I wrote the last word, we embraced, and I told them how proud I was of their accomplishments. I helped them pack their bags, drove them to an imaginary airport and shooed them away with all the love and insistence of a parent sending a child off to summer camp.

We need a break from each other.

Goodbye, I called out to them. Enjoy your little vacation! Rest from your labors! Breathe deep the aroma of freedom and peace.

« If dogs could write
Hidden in the pages »