Resilience in a jar 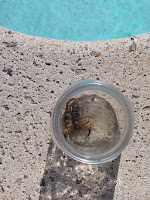 I was sitting with a friend earlier this week and we were talking about someone we both care about who’s having a tough go of it.

Somehow our conversation moved from the aches of one to the agonies of thousands — our thoughts had turned to the earthquake in China and the unspeakable number of people whose lives have been snuffed out. Lingering in the background was the unspoken fact that the dead and missing are still being counted after the cyclone in Myanmar and that the number was thousands upon thousands.

“You know,” I said. “You can only take your heart so far with this. And then you have to stop. You just can’t take it all in. It’s too much.”

Yesterday my thoughts ached with the knowledge that singer/songwriter Steven Curtis Chapman and his family are mourning the tragic death of a loved 5-year-old daughter, killed when another family member accidentally hit her while driving the family SUV.

It’s too much, too much.

And yet, we are forced, aren’t we, to keep breathing, to keep moving forward. The planet still spins. Somehow we have to find that secret place within us where resilience lies. And keep breathing.

Not long ago my husband removed a scorpion from the bottom of the pool. We had no idea how long it had been there. Overnight, for sure. My husband dropped its lifeless body into a jelly jar so we could show it to our teenage son. The dead scorpion was a big one, perfectly shaped, nasty pincers in their proper place, its curly tail a resting half-circle of golden brown. We don’t often seen them that big and that close.

Something happened between the time the scorpion was pulled lifeless from the water and six hours later when we went to look at the body. The tail was now hooked and poised to strike, and those lobster-like pincers were at the ready. The thing was alive and mad. I don’t think it even occurred to him that he’d been rescued at his darkest moment. We wished him well and let the ungrateful thing go – far from the house.

I’d never seen such resilience before. I don’t want to be like that scorpion. I don’t want to escape death by waking up from turmoil ticked at the world. But I had to admire the scorpion’s tenacity. I suppose it couldn’t really have been dead. Perhaps insects like that can survive hours submerged. I don’t know. I just know what it looked like when we first put it in the jar. Dead.

But inside the fellow must’ve been thinking. Just hold on, hold on. It won’t always be this way. It will get better.

« A great color on anyone
I feel stoopid »