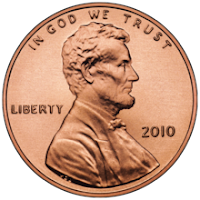 In my lifetime I’ve seen a steady retreat of cultural icons into the history books. The rotary phone is gone. The 8-track tape player is gone. Space food sticks are gone. Even dear Pluto is gone. I don’t miss the rotary phone, never owned an 8-track, and I wasn’t a huge fan of Space Food Sticks. I did and still do have an affinity for Pluto and still count the little orb a member of my own personal solar system.
And so I am feeling a bit nostalgic regarding the penny and the talk of its demise. Columnist John Fund in a recent article on NationalReview.com says its time to kill the penny. And for a lot of reasons I totally get. First, it costs more to mint a penny than its actual value, even as a less than all-copper coin. Second, no one picks up a penny off the pavement, or carries pennies in their pockets, and few people make change with them. They get them back in change, but they throw them into a jar at home which places them out of circulation, prompting the minting of more at a loss of $100 million a year to the Treasury.
I confess that I carry few pennies in my purse. I don’t pick them up off the pavement. I toss them in a dish at home. I take them out of circulation without so much as a care.  I even throw away the disgustingly ugly ones – you know, the ones that look they’ve been in the back pocket of a zombie the last twenty years. So I don’t deserve to have the penny anymore.

And apparently, we wouldn’t lose much by retiring the penny and even letting retailers round up every price tag to the nearest nickel, because they would definitely round up, not down – less than $20 year for the average consumer.

So I get it. It just seems a little sad. Just a little. And even that seems sad; that it’s only a wee bit melancholy to lose it for good.

Nickel for your thoughts?

« Subtle as she goes…
Don’t close your eyes »