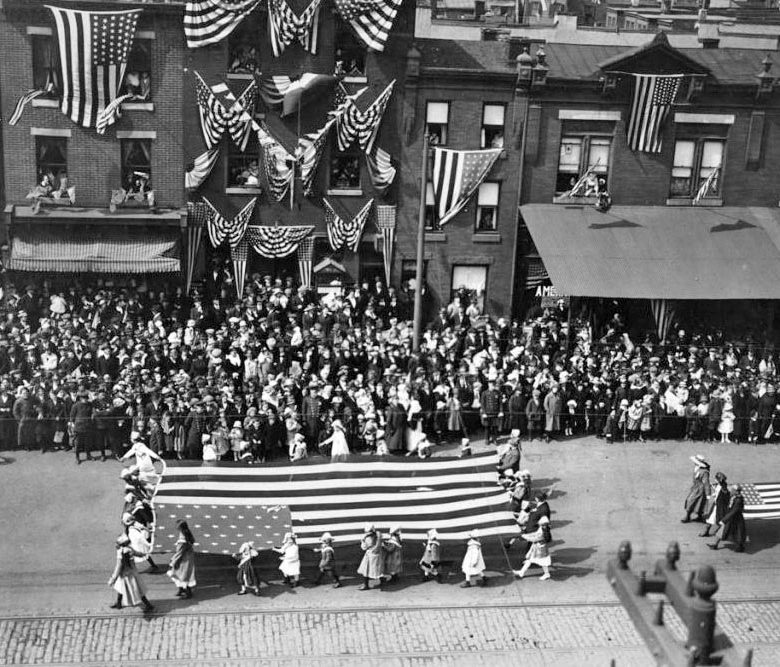 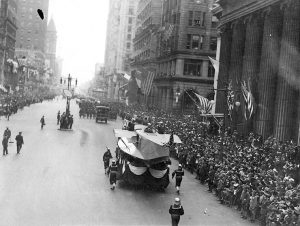 One hundred years ago today, the city of Philadelphia held a Liberty Loan parade on Broad Street. An estimated two hundred thousand people lined the streets, standing shoulder to shoulder. Expectations were high that a great deal of money would be raised as a result of the parade, to help fund and end The Great War. It was no secret that a terrible sickness known as the Spanish Flu had spent the summer months ravaging Europe, and that this same disease was now popping up at army bases and naval ports on the Eastern U.S. seaboard, but the parade had been planned for weeks and besides, the parade was outdoors, not in confined quarters, and not at the Philadelphia Naval Ship Yard. So despite the knowledge that this deadly flu was now in Boston and New York and Washington D.C., the parade was held anyway with much fanfare.

But three days later more than 100 Philadelphians were dead of the flu and thousands were sick with it. Five days after the parade, all Philadelphia schools, churches, theaters, parks – anywhere where a crowd would gather – were closed. The city’s hospitals ran out of beds, its morgue ran out of slabs, its morticians ran out of coffins. In about a months’ time, twelve thousand Philadelphians were dead.  It was the hardest hit American city, which is why I chose it as the setting for AS BRIGHT AS HEAVEN. 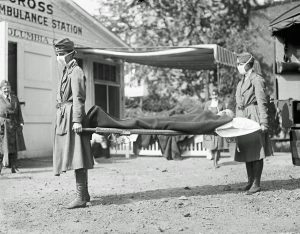 As we slide into October, the centennial for the 1918 Spanish Flu is nearing its end. By mid November of 1918, the flu was lifting and by Christmas it was gone. It would return in the spring of 1919, but the strain would be different – not nearly as deadly and nowhere near as prevalent.

I’ve been wondering all year if there would be renewed interested in this plague since it is all but forgotten in our day and age. Those who survived that terrible time recovered from their losses by shutting the door on the remembrances of Spanish Flu. They cried and mourned and then moved on and didn’t look back.

And here we are 100 years later, well beyond the recovery stage. We should be fully invested in the remembering stage, but there isn’t much being said, not that I can see or hear.

It surprises me, I guess, that humanity could be dealt such a blow – 50 million are estimated to have died of Spanish Flu – and there isn’t more being said, especially this year. Since AS BRIGHT AS HEAVEN’s release in February, I’ve heard from a great many readers who’ve told me stories of how this flu impacted their families, including one woman who told me her dad lost his father to the pandemic when he was 11, and his mother – unable to care for her children on her own – married the first person who asked her. The man she married did not want to raise this 11-year-old boy or his brothers. They were given away to farmers to work and be raised on their own. You can imagine the impact this had on this reader’s father. And that was just one person who wrote me.  There are probably tens of thousands of stores that are as emotionally impacting as this one.

But there’s nothing being said about it. I find it curious and a little sad. I think 50 million people felled by a killing flu deserve remembrance even if it was 100 hundred years ago.

What we don’t purpose to remember we surely will forget.