Messing up the morning routine 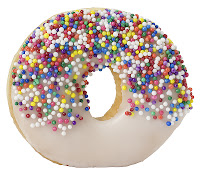 Every schoolday morning for the last five months my teenage son and I have had the same routine commute to his high school three miles from our house.

We get in the van, we ease down the hill and we snake our way into the crush of other folks making their way to the campus.

Everyday we’ve seen the same red Corvette parked in a tiny strip mall parking lot at the corner where we turn left. Every day we’ve seen a bald man in the doughnut shop wearing a leather jacket, reading the newspaper and holding his cup of coffee while it rests on the table. He always sits by the window. He always wears the black leather jacket. He always has a cup of coffee and a doughnut. We know that red Corvette is his. We just do.

It’s become our habit to turn our heads to the right as we make our way into the left turn lane. We don’t know his name or anything about him other than he likes red sports cars, doughnuts and the Union Tribune. My son says he’s old. I say he’s in his late 50s , early 60s. My son says that’s old.

It’s comforting to see this man every morning. Seeing him there with his coffee and glazed doughnut lets us know all is right with the world and, if nothing else, seeing him assures us we aren’t running late.

But he stopped coming a few days before Christmas vacation. We’d get to the intersection and no red Corvette. No bald man at the table by the window. Yikes. The cosmos shuddered. I decided that he went away for the holidays with his wife Renata. They flew to the island of Capri and had Christmas at a seaside resort and toasted the New Year with limoncello.

But hey. It’s January 7. School started up today. No Corvette. No bald man. The table by the window is empty.

My pessimistic side says he had emergency bypass due to eating far too many doughnuts and now Renata and his doctor have forbidden him to come to DonutLand and so he spends his mornings eating dry toast.

My optimistic side says he and Renata loved Capri. They loved it so much they couldn’t leave it. And now the bald man’s brother is driving his red Corvette and hoping the bald brother stays in Italy a long, long time.

I’ve got an idea. Send me your thoughts on where my bald man went. Give him a name and a reason for messing up my mornings. You have until midnight Thursday to post your entry. Winner (chosen by my teenage son) will get a free copy of my upcoming release, “Blue Heart Blessed,” coming your way in Feb.

« From desert floor to snowy peaks
Wilson is alive and well »