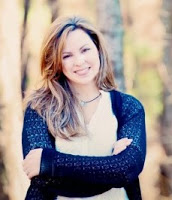 I love a book that uses the power of subtle metaphor  to deliver the goods and that’s what you get from native Southerner Kimberly Brock‘s new book, The River Witch. There are so many whispers of things being more than they are in this lovely debut novel- the river, a blind alligator, pumpkins, an herb garden,  sacred harp music – so many delicious ones that I simply must read it again.

In a nutshell the story is this: Roslyn Byrne’s career as a professional ballet dancer is ended by a car wreck. Add to that heartache a miscarriage and it’s no wonder she is lost in a fog of dashed dreams. In desperate need of a change in perspective, Roslyn heads to Manny’s Island, Georgia, one of the Sea Isles, at the coaxing of her mother. On the island Roslyn meets a meddlesome yet heart-tugging ten-year-old girl named Damascus – an audacious name (she was named for the river) that is a lovely metaphor for the hope that innocence adds to any story. The girl’s family, the Trezevants, whom Roslyn rents a house from, are perfectly imperfect; the ideal quirky bunch that a hurting gal like Roslyn must meet if she is going to find her way out of the abyss of grief and reconnect with the music of her soul.

It was this umbilicus to music that drew me more than anything. And for good reason. Music has always been maternal to me. Kimberly has a wonderful blog post on She Reads Book Club (The River Witch was a recent pick there) where she details how music played a role not only in the story but also in the writing of it.  Check out the music Kimberly listened to while she wrote.

I love what one endorser wrote about The River Witch; it pretty much summarizes my thoughts exactly. “With lyrical prose, Kimberly Brock explores the hidden places of the heart. The River Witch is a magical and bewitching story that, like a river, winds its way through the soul. In the voices of her wounded characters, Brock takes us through both the breaking and the healing of a life.” -Patti Callahan Henry, New York Times Bestselling Author of The Perfect Love Song.
Now to go listen to some sacred harp…