Even here, there is fall

When I moved from Minnesota back to California earlier this year, I said farewell to cicada songs, pop, frog eye salad, sundogs, chiggers and Alberta clippers. I kissed blizzards goodbye (no love lost there) and tornados and boxelder beetles and fireflies. I also had to say farewell, or so I thought, to autumn; that spectacle of crisp, chaotic color that nearly hurts to look at and is so enchanting it makes up for the six months of winter that follow it.

I didn’t remember fall in southern California being much different than its spring. But I remembered wrong. There is an hors d’oeurve-like autumn here that is sneaky and subtle. Where in Minnesota there is tree after tree in blazing boulebard beauty, here there is just the occasional liquid amber, the scattered maple wth leaves that actually look auburn in the 80-degree sun. A Virginia creeper here and there. An ash and birch — dainty dicideous delights that you have to look for. But they are there. Yes, they are bit outnumbered by olive and manzanita, pepper and palm, but they are there if you look for them.

Like so many other lovely things in life that you could easily fail to notice if your aren’t eyes open, and you’ve no expectation of being wowed now and then. . .

And now before I head out until Friday, here is a new book, Shadows in the Mirror, by my friend Linda Hall. Perfect for a fallish afternoon when a book, a cup of something warm and slippered feet are all yours. 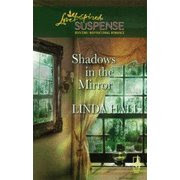 ”Never go back to Burlington!” Those were the dying words of the secretive aunt who’d raised orphaned Marylee Simson. Yet to discover who she was, Marylee had to go back, sure the Lord would look out for her. But learning anything about her past was proving impossible. Why were there no records of the accident that claimed her parents’ lives? No records of her parents, period? And who was trying to stop her from finding out? Someone whose threats were escalating. Someone close to her, such as Evan Baxter, the handsome photographer she’d entrusted with the one clue she had.

Here’s what The Suspense Zone had to say about Linda’s newest: “In Shadows in the Mirror, Hall has done an excellent job or marrying her skills in character development and suspenseful plots with a strong romance element. Though, I am not an avid romance reader, Shadows in the Mirror provided me with a fast moving, yet intriguing mystery to keep me reading until the very last page and yet provided just the right amount of romance to satisfy the Romantic Suspense reader but not overpower the work for others.With Shadows in the Mirror you have cause to celebrate, as another strong Romantic Suspense author has been added to the must read list.”

Linda tells me that Shadows in the Mirror is the first in a three-book romantic suspense trilogy where shadows of the past must be accepted, acknowledged and forgiven before one can move on in life and love in the present. You can learn more about Linda right here.

« Lessons from the virtuoso
Where’s the tension? »