So my daughter and I are out strolling the mall near her lovely apartment and we stop for a pick-me-up at a cafe with a French name.

I see that cappuccino is written on the menu hanging above the teenage boy at the register. He is wearing a cobalt blue apron and it might possibly be his first day. I ask for a cappuccino.

He frowns. Not at me. Just in general. “Uh. We don’t have that anymore,” he says.

Wow. Okay. No cappuccino at a French cafe. I look up at the menu. Ah! Cafe au lait! French (very nearly) for cappucino!

He truly looks as if I’ve asked for a bowl of schnozberries.

“Cafe au lait,” I say, very distinctly and I point to the menu hanging above his sweet head.

He looks at it.

“We don’t have that anymore,” he says.

We take our very American drinks to an outside table to enjoy San Diego’s sunshine and I murmur something like what’s the world coming to when you can’t order French coffee at a French cafe, even though I knew that kid was 100% SoCal with not a drop of French in him. “What in the world did he think I was asking him for?” I said to my daughter.

She cracked a grin. “I think he thought you were asking for a Cafe Ole.”

Cafe Ole. As in may I have a taco to go with.

It was muchos minutos before we stopped laughing.

And now, it’s my pleasure to yak about my good friend Robin Lee Hatcher’s new book Bundle of Joy. Robin is one of the nicest people you will ever meet and a lover of happy endings. Here’s what her newest is about:

Alicia Harris says she’s happily married and expecting a baby—but only the last part is true. She can’t bear to tell the grandfather she loves that she’s about to become a single mother. When her grandfather, recovering from a heart attack, drops in unexpectedly to spend the holidays, Alicia is frantic to protect her beloved grandpa from undue stress. She needs to find a fill-in and fast. Childhood friend Joe Palmero fits the bill and is willing to play along. The longer they spend playing their parts, however, the closer Alicia and Joe come to discovering what love, faith and marriage truly mean. 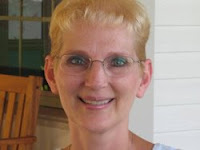 Robin says she discovered her vocation as a novelist after many years of reading everything she could put her hands on, including the backs of cereal boxes and ketchup bottles. The winner of the Christy Award for Excellence in Christian Fiction (Whispers from Yesterday), the RITA Award for Best Inspirational Romance (Patterns of Love and The Shepherd’s Voice), two RT Career Achievement Awards (Americana Romance and Inspirational Fiction), and the RWA Lifetime Achievement Award, Robin is the author of over 55 novels, including Catching Katie, named one of the Best Books of 2004 by the Library Journal. And she really is one of the kindest souls on the planet. You can find her here on the web.