Thoughts on The Dutch House

Since reading Bel Canto years ago, I have said I will read anything Ann Patchett writes. I missed a few of hers pre-Bel Canto and while I haven’t yet gotten to them, it comforts me to know that they’re waiting for me for when life slows down (I’ve heard that happens; one day you wake up and you’re older and retired and you can read all the time). When I heard The Dutch House was coming out and saw its distinctive cover (Who IS that girl? I wondered) I put it on my TBDWIR (To Be Devoured When It Releases) list pronto.

And then it released and people were talking about it, and it was popping up on bestsellers lists all over the place and audio book lovers were swooning over this tale being read to them by the venerable Tom Hanks. I hurried through the other required reading I was working on, and made space in my life to enjoy The Dutch House. I had already bought it, it was just there on my cluttered nightstand awaiting me.

I hadn’t read much about the novel, which is my usual thing. I don’t read the back copy of books I know I am going to want to read. Sometimes there are mini spoilers there. So I didn’t know what The Dutch House was or who lived in it or what it meant to them. I didn’t know what the evocative painting on the front meant and I certainly couldn’t know how I would be affected when Patchett revealed the significance of that painting, and this at a time in the story when I had already fallen in love with these perfectly drawn characters. It was the kind of book that I couldn’t wait to get back to, not because I just had to know what happened next, but because I just had to know what happened to these characters next.  Here is just one of the beautifully composed thoughts penned in its pages.

“There are a few times in life when you leap up and the past that you’d been standing on falls away behind you, and the future you mean to land on is not yet in place, and for a moment you’re suspended knowing nothing and no one, not even yourself.”

I was going to use the back cover copy to tell you what the book is about but I’m not going to. I will just say it’s a book about a brother and sister, and their childhood home, and everything that the word “home” might and should conjure up in your mind when you hear that word spoken.  I loved it so much I am going to use one of my Audible credits and have Tom Hanks read it to me. I hardly ever read books twice because, you know, so many books, so little time. So you know it’s a good one when I tell you I’ll be “reading” this one again. Soon.

The TBR tower just got taller

Paging through the current issue of Publishers Weekly and browsing all the books that lucky BEA attendees can get their hands on made me wish I was a bookseller with a cute little bookshop on a gentrified old street, and this not for the first time. If I owned a bookstore, I’d be packing my bags for the delish book expo in Chicago and I’d be standing in lines for these, which are now on my Goodreads Want to Read list: 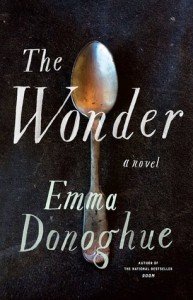 I was a fan of Emma Donoghue’s ROOM before long before it became an Oscar-worthy film. I was spellbound by Emma’s storytelling skills and how she expertly wove her characters’ emotions into my own. In her upcoming THE WONDER, a small Irish village is mystified by what appears to be a miracle but may actually be murder. Goodreads says: “The Wonder works beautifully on many levels–a simple tale of two strangers who will transform each other’s lives, a powerful psychological thriller, and a story of love pitted against evil in its many masks.” You want to read it now, too, right? 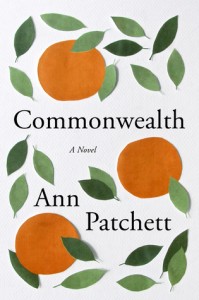 I read Ann Patchett’s BEL CANTO ages ago, and knew I’d stumbled upon a stellar wordsmith. I loved her STATE OF WONDER from a couple years back and so am natch looking forward to anything new by her. Her newest, not out until September, is COMMONWEALTH, a story that spans five decades. This novel explores how a chance encounter at a family christening echoes on in the lives of four parents and six children. “Told with equal measures of humor and heartbreak, Commonwealth is a meditation on inspiration, interpretation, and the ownership of stories. It is a brilliant and tender tale of the far-reaching ties of love and responsibility that bind us together.” 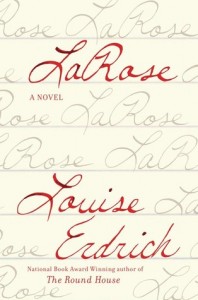 When my family and I lived in Minnesota some years ago, I longed to read a Louise Erdich novel, as she’s a Minnesota legend and treasure, but life was so busy, other books took precedence and it never happened. I hereby mostly vow to read this one. Out next month, LaROSE is “an an emotionally haunting contemporary tale of a tragic accident, a demand for justice, and a profound act of atonement with ancient roots in Native American culture.”  In the story, which is set in 1999, a father is hunting a deer along the edge of his North Dakota property but realizes after he’s pulled the trigger that he has instead shot and killed his neighbor’s five-year-old son. Devastated, the man offers up his own beloved son to the grieving family as a recompense. “Inspiring and affecting, LaRose is a powerful exploration of loss, justice, and the reparation of the human heart, and an unforgettable, dazzling tour de force from one of America’s most distinguished literary masters.” 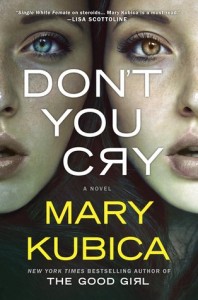 I was thoroughly gobsmacked (isn’t that a great word?) by Mary Kubica’s THE GOOD GIRL and even though I still have PRETTY BABY on my TBR Tower (a pox on mere 24-hour days!!), I still can’t wait to read her upcoming DON’T YOU CRY. Mary is such a great writer, and the nicest person you’ll ever meet. That she writes page-turning thrillers casted by such sinister people is so ironic! In this one, a young woman disappears from her apartment. A haunting letter is found among her possessions, leaving her roommate to wonder whether or not her friend is the person Quinn thought she knew. “Mary Kubica takes readers on a taut and twisted thrill ride that builds to a stunning conclusion and shows that no matter how fast and far we run, the past always catches up with us in the end.” And yes, yes, yes, I will get to PRETTY BABY before I snatch up this one.

So, even though I have no business buying any of these books in the next few months, I probably will. There are worse addictions than buying new books, yes? What’s on your list these days?