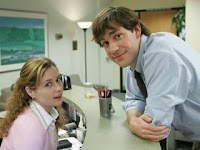 Okay, I confess. I am an Office fan. A devotee. I plan my Thursdays so that I am home by 9 p.m. and I have the previous seasons on DVD so I can watch the older episodes if I get a hankering. My family is addicted, too.

Sometimes the show makes me blush. Sometimes the humor is too crude to be truly funny, but most of the time I am glued to the storyline. The Office is the perfect laboratory for characterization observations. I’m serious. I could count watching The Office as a business expense if that were possible. That’s how deeply flawed, searching, endearing and engaging the characters are. And the best part is, it’s a comedy so we really don’t have to take any of it too seriously. But wait. But there are exceptions . . .

The Office actually has its moments of dramatic brilliance. Like season three’s episode where Michael visits Ryan’s business school and then later stops by Pam’s art show; he’s the only Office member to attend and affirm Pam as a person and artist. Remember that one? Yeah, Michael’s a narcissistic buffoon most of the time, but every now and then he becomes a hero and he doesn’t even know it. Like in this episode. I think I actually teared up the first time saw it. The producers had tapped into my deeply emotional side.

And so here’s the problem I have with season four. My emotional side has been following the “she likes him/he likes her” circus that has followed Jim and Pam since the first season. Season one was the set-up. Season two was the tension-soaked lead-up to The Big Kiss. Season three was the agonzing pull as they pretended each did not love the other and which ended with Jim finally asking Pam for a date. So here we are at season four. We have waited three seasons for this. And how are we devotees awarded for investing emotionally into Jim and Pam’s troubled affections? The tension rug is pulled out from underneath us. The emotional roller coaster comes to a skidding, whiplash-inducing halt. J & P are simply a couple now. They just are. No peeks into The Date we waited so long for, and no Kiss like the one that sealed season two. The brakes have been aggressively applied and the engine is idling now, barely puffing out any steam.

I still love the show but the writer in me – who longs to master the art of skillful charaterization and audience engagement – has learned a startling truth: Where you have sown troubling tension you must reward with satisfying, observable results. We have been able to observe nothing.

I’ve stopped caring about these characters and that’s bad, from a writer’s standpoint. You know what I mean? Anyone out there getting any of this? Or I am the only one?

« Even here, there is fall
Familiar beginnings »