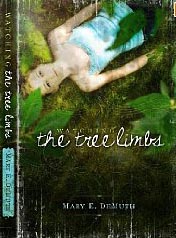 My good friend Mary DeMuth has just released her critically acclaimed debut novel, Watching the Tree Limbs onto the Kindle format. I’ve been getting my out-of-print novels onto Kindle as well, and I can say I am thankful to have a place for books like these to find new readers. (My Blue Heart Blessed made it to e-book form just last month) I thought we’d catch up with Mary today on what was transpired in her writing life since Watching the Tree Limbs made its inaugural appearance.

Here’s the story in a nutshell: Amid the red dirt and pecan trees of East Texas, nine-year-old Mara struggles to find her way through a painful and mysterious family situation. Who were her parents? Is her aunt Elma really her aunt-and does Elma really have a tumor? What will happen to her if her aunt dies? The pain in Mara’s life multiplies when she meets General, the teenage neighbor who repeatedly abuses her, threatening her life if she tells anyone. DeMuth captures the horrific situation-from Mara’s inability to keep her body from shaking to her determination to watch the tree limbs to keep her mind off of what is going on-while providing hope of redemption and healing.

EDGE: What has been the most amazing thing that has happened because Watching the Tree Limbs is out there in the world?

MARY: It’s been heartening to see lives changed as a result, mostly folks realizing that they were no longer alone. And seeing Mara walk through a semblance of healing and rescue helped them see their abuse in a new light, I think. Plus Tree Limbs was my very first novel to be published, so it opened up doors for me to write The Defiance series which is also very dear to my heart.
EDGE: What has been the most challenging thing?
MARY: I felt far more exposed when I published Tree Limbs than most any other book (with the exception of Thin Places, my memoir). After the first draft, my editor said I didn’t allow the main character, Mara, to have emotions as a little girl while chaos and pain swirled around her. The problem was, when I was young, I wasn’t allowed the luxury or emotions either. So I had to assign the emotions to my character I hadn’t been allowed to show. Quite cathartic, actually.
EDGE: Do you feel the same way about these characters that you did when you first
wrote it?
MARY: I have a distance from them now, but I still really love Denim the radio man so much. He is flawed but a hero.
EDGE: How did writing this book influence or affect the novels you wrote after it?
MARY: I overwrote Tree Limbs (too much description, too much flower), so I didn’t (thankfully) take that into my next novels, but I did take with me my narrative voice, my love for flawed characters, and difficult subject matters.
EDGE: Tell us about the new cover for the e-book version.
MARY: My friend George at Tekeme Studios designed it for me. The girl is actually my youngest daughter that I took from above in a tree. I worried a bit about having my daughter as a model, but she was happy to do it, and I believe she did a great job of looking haunted.
Watching the Tree Limbs as an e-book is a great buy at just $2.99. It was nominated for the Christy Award in 2007 in the category of First Novel and Publishers Weekly says it’s a “thoughtful, powerful reflection on a difficult topic and… a compelling story.”
Highly recommended, Edglings! Hope you have a great week. See you Friday.  . .