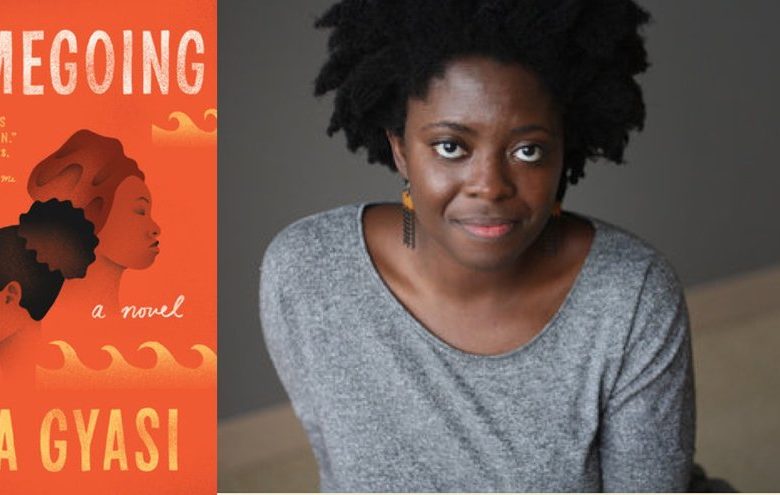 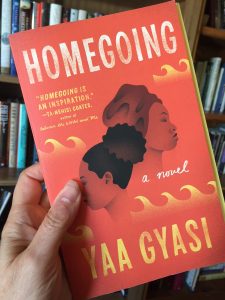 Two weeks ago I wrote how much I LOVE visiting bookstores (indies, mostly) whenever I am on vacation and I mentioned that I’d just returned from a visit to my daughter and son-in-law’s place in the Pacific Northwest. I shared that I’d popped into the Village Books in Bellingham, WA., and a store clerk told me how much she loved this book HOMEGOING by Yaa Gyasi. Her name was Joan and she held the book to her heart after she told me it she loved it and searched for words – at least that’s what it looked like to me. I don’t think she found them — the adequate words. “It’s just so good,” she finally said. She handed the book to me so that I could look at it, smell it perhaps because we booklovers do that, peruse the backcover copy, etc. She went on to share a few of her other favorites, as we were standing in front of an end cap display of staff picks and each member had been given a shelf to display his or her faves. I could’ve put HOMEGOING back but I held onto it as she shared with me other books she’d read and loved. When I thanked for her talking with me, I started to walk away with HOMEGOiNG to take it downstairs to buy. She broke into a smile. “You’re getting it?” she said. “I am,” I replied. Any book that makes a bookseller hold it to her chest and search for words to describe it is my kind of book.

I was not disappointed. This is one of those rare novels that grabs you, but gently, from the first page and doesn’t loosen its kind but compelling grip. I fell under the spell of these richly drawn characters as though they were flesh and blood and standing right next to me as they told me who they were, what they wanted from life, why they wanted it, and what stood in their way. It’s a generational tale, told by sons and daughters of two half-sisters from Ghana – one who remains in Africa and one who is sold into slavery and shipped to America. It’s an forgettable story of family and love and honor but also injustice and greed. You see the best of humanity in the pages, and the absolute worst. Perhaps you don’t like to read books about man’s inhumanity to man – too sad, you might say. But I think now and then we need to see who we can be if we don’t practice the art of loving diligently and with purpose and passion. This book will show that to you.

Here’s what the back cover says about it. “Ghana, eighteenth century: Two half sisters are born into different villages, each unaware of the other. One will marry an Englishman and lead a life of comfort in the palatial rooms of the Cape Coast Castle. The other will be captured in a raid on her village, imprisoned in the very same castle, and sold into slavery. Homegoing follows the parallel paths of these sisters and their descendants through eight generations: from the Gold Coast to the plantations of Mississippi, from the American Civil War to Jazz Age Harlem. Yaa Gyasi’s extraordinary novel illuminates slavery’s troubled legacy both for those who were taken and those who stayed—and shows how the memory of captivity has been inscribed on the soul of our nation.”

I highly, highly recommend. And if you’ve read it, I’d love to hear your thoughts. And Joan, thank you…

« What I’m listening to…
What I’m reading now »