Another winner by Brennert 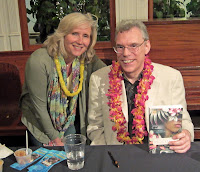 I promised highlights from the One Book One San Diego event last week with Molokai author Alan Brennert and I must ask for your forgiveness for my tardiness in getting back to here to do just that. Life has a way of crowding in on your plans. Had a crazy busy stretch of days. I looked up from it all, amazed that a full week had gone by already. Yikes.
Suffice it to say that the evening was wonderful. KPBS and the San Diego Library held the event on a retired ferry, The Berkeley, that dates back to 1893, right about the time the protagonist in Molokai, a little girl named Rachel, was born. There was Hawaiian guitar music before and after, Hawaiian refreshments, and of course comments and insights from the talented Alan Brennert. I have already used this blog to tout the merits of Molokai – it’s a fabulous read – so I won’t slide into redundancy here, but if you have the chance to hear Mr. Brennert speak of his research trips to Molokai and the writing of this book, jump on it.

The day after this event, which I attended with some book club friends, we and the rest of the club gathered to discuss Honolulu, another fabulously researched and crafted novel by Brennert, this one centering on a supremely likeable Korean picture bride named Jin. I loved Molokai and had nearly the mirror-imaged feelings for Honolulu; it’s a close second-place finish.

The best thing about Brennert’s writing is you get totally caught up in his fictive world, almost unaware that you are learning so much history while you are captive to the story. I read Michener’s Hawaii thirty years ago, and I remember being floored by the historical richness, but you get the same thing with Brennert’s books on Hawaii in a quicker read and with more memorable characters. I highly recommend both.

And now, the book that wants to be written is teasing me to come have at it. Better go while the muse is in a friendly mood. Have a lovely Memorial Day weekend.

To each our own 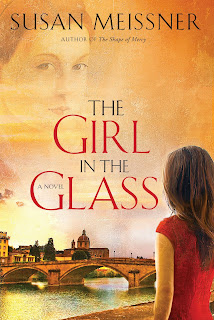 A couple weeks ago, my publisher decided to poll the masses to see which of the three possible covers in the works for my upcoming THE GIRL IN THE GLASS should be the final. There had already been much debate in house over which one captured the essence of the story best. It was surprising to me – even at that point – how wide the spread of opinion was. We all wanted the best cover to win out of course, and the person who can best identify that winning cover is the person who will buy it – the consumer.

That’s when WaterBrook asked me to ask my readers and Facebook and Twitter friends, and they did the same on the website. I had over one hundred opinions tossed my direction and WaterBrook had about 800 – some of those were likely repeats from my poll after I encouraged my peeps to also weigh in on the official website.
Again, the three covers all had uber-fans. There was a clear winner, but she didn’t win by a landslide, which was actually kind of comforting to me. It meant that all three had shelf appeal.  The one that won is the one at the top of this blog post. And I do like it very much. It is a mash-up of the white one with the Medici princess as the predominant human element and the one of red-dress Meg looking out over the River Arno. It works on many levels for me. But it wasn’t my favorite.
I told some of you that when the polling was over I would reveal which one was the one I liked best.  So here it is! The one I liked best. The white one.

Some of those polled thought the image of Nora Orsini – the Medici princess one of my characters thinks she hears speaking to her from with the great Italian Renaissance masterpieces – was a little unnerving. Ghostly, maybe. I never caught that vibe from this one, probably because in the story – which granted, no one has read yet, Nora is very much not a ghost. She is something else, but definitely not a specter from the creepy Other Side. And I liked the white, glassy feel of this one, and Meg in white seemed like a great choice for her, even though red is my favorite color and I do love that red dress in the winning cover. In the end, though, the most satisfying thing is that we have a cover that people will like and will be compelled to pick up or click on, and hopefully buy.

Maybe  after the book comes out and you’ve had a chance to read it, you might come back to this blog post, look at this cover that was my favorite and tell me what you think.

By the way, the same graphic artist at WaterBrook created all three covers. She is an amazing interpreter of content. Hats off to you, Kelly. You saw into my cluttered brain. Well done. And thanks again all, for your input and insights.

On Friday, I hope to regale you with the highlights from having seen Alan Brennert, author of Molokai and Honolulu at one of his San Diego appearances this week. Stay tuned! Aloha…