There is a scene in Disney’s Finding Nemo that is brilliantly funny. Seagulls, the obnoxious rodents of the skies, are slumming around the harbor in Sydney, Australia, looking for vittles, and ready to claim anything that looks remotely edible as theirs and theirs alone. In case you need a refresher, here’s the scene:

It amuses me the animators gave this very human characteristic to name it and claim it to these gulls. I see a similar scenario playing outside my kitchen window all the time. I have a hummingbird feeder that I fill with simple syrup that I make myself (I call it methctar because my little hummers are addicts. When I place a new batch out and it’s late afternoon, there can be as many as a dozen little zoomers vying for a place at the table. My son Josh says it’s like a pub full of regulars). They are ravenous little creatures. I have to make a new batch everyday.Lately there’s been a ruby-throated male who has gone all “Mine!” with the feeder. He will perch on top of it like he’s a pirate guarding stolen treasure. He’ll chase away any other hummer with aerial warfare that is impressive to watch if it wasn’t so audacious. 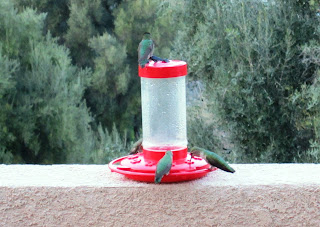 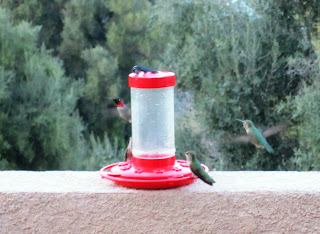 It’s like he thinks he’s the one buying 10-pound bags of sugar at Costco and making the concoction every morning and washing out the feeder and filling it and cleaning out the saucepan and all that.

He guards it like he owns it. And yet if you could ask the little feller where this motherlode of methctar comes from and how is it that it magically refills every day, he’d probably turn to you in all his scarlet-necked plumage and say, “I don’t care about that. It’s mine. Off you go!”How funny it is that he can look at the bounty he sits on and think he somehow makes it happen just by claiming ownership. There’s a lesson in there somewhere, dontcha think??

For your Friday reading pleasure I am sending you to an interview that went live today and which I think you might enjoy. I am the blogoversary guest on Hardcover Feedback and the questions are fun and hip and there are pictures of my favorite things. There’s also a giveaway of a signed copy of A Sound Among The Trees! Hope you enjoy it.

Have a fabulous weekend…

There was a time, not so long ago, when a book would go out of print and that was that. If it was a title you wanted to own, you had to haunt used bookstores and estate sales looking for it. Sometimes you would find it, sometimes you wouldn’t.

Those were sad days.
Think what you will about electonic readers and the saucy way they plan to take over the book world, but they do for books what the print world could not – keep them available to be read.
I am happy to tell you that another one of my older books (older is a relative term, it’s less than ten years old) that had been out of print, is now alive again in e-book form with Greenbrier Books. A Seahorse in the Thames is a tale about finding beauty in unexpected places and I was inspired to write it based on a true event. A few years back, a London fisherman found a seahorse dancing about the weeds in the Thames, an arguably busy river that has been industrialized to the point of non-beauty. And yet, there in the reeds, where you’d least expect to find it, was a seahorse. A bit of beauty in a most unexpected place. I took that little idea and crafted a story about a young woman whose life seems to be uncharmed. She longs for a beautiful life; and she is nearly ready to believe it has passed her by until circumstances make her kneel down and look at a little bit of wonderful beckoning to her.

If you haven’t read it and like a different kind of love story, well here you go. It’s a great price at under five bucks, too. Here’s the Amazon link for Kindle and the B & N link for Nook.

Have you ever found beauty in an unexpected place? Do tell…

At long last here is the promised review of the latest book I read for research slash pleasure. I have an idea in my head for a new novel and I am setting it on Ellis Island at the turn of the century. I don’t have any living relatives who can tell me what it was like when my German, Irish, and French ancestors came to America; I am not even sure if they came through Ellis, so I have a lot of research to do.

My first order of business is to read other books set in the same time period to get my story percolator percolating. I love love love the cover of Kate Kerrigan’s Ellis Island, and hey, with a title like Ellis Island, it was the perfect way to begin the arduous task of learning everything there is to know about Ellis, right? Here is the interesting thing about this nicely-written book. Interesting and strange. Interesting and strange and perplexing.

The main character telling the story? She spends maybe three or four hours total on Ellis. For the whole book. And the book encompasses years of her life.  And they are not even pivotal hours. I could see if the half-day she spent on Ellis made some kind of door-of-no-return impact on her life. But she has the easiest transitions from boat to land you can have as a third class immigrant. And I’ve done enough research already to know it wasn’t always that easy. If you had any kind of physical ailment, you were in for a rough ride, either back to where you came from or an extended stay at Ellis’s hospital.

It wasn’t that I didn’t enjoy the story, I did. In a nutshell, Elle Hogan and her childhood sweetheart husband, John, are happily honeymooning on their farm in Ireland—until John, a soldier for the Irish Republican Army, is shot and left disabled. With her husband needing an expensive operation to be able to work again, Ellie emigrates to New York City to work as a maid for a wealthy socialite to earn the money for the surgery. On the streets of New York, Ellie is introduced to glam and sophistication, and she is soon tempted by the allure of material charms and a dashing young suitor who can give her anything she wants. She comes to a point of decision as the many months go by and the surgery has long since been paid for: stay and live the charmed dream or go home to the man she is married to and once couldn’t imagine living without.

Great storyline, right? It was. How much Ellis Island was there?

Nice read. Pulls at the heart. Gorgeous cover. But the title baffles me. I am scratching my head looking for the metaphor here, thinking maybe there is one. So far, no revelations. Perhaps you have an idea out there?

I really was all set to post a review this morning of a novel I finished reading last week but then I read my daughter’s blog post. I’ve decided the review can wait until Friday. I really, really liked what Stephanie had to say, and not just because she’s my daughter. I can be objective when it comes to writing; something either resonates with me or it doesn’t. That’s the subjectivity, if there is to be any, with this. I just really liked what she wrote. And it presented a new concept to me, which I find so very refreshing since, well, she’s my daughter, and it’s easy to think we are always in mentor mode when it comes to our adult kids. Not always the case. If you’ve had a rough go of it lately, you will probably find the wisdom here that I did . . .
“Defeat only lasts as long as you let it.”