Coming your way in February 2018 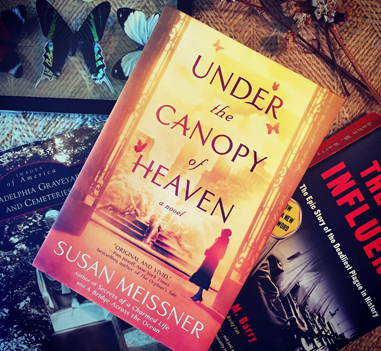 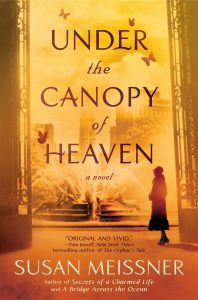 Words don’t adequately express how much I LOVE the cover for this new book of mine which will be released into the wild on February 6, 2018. Under the Canopy of Heaven will be my first hardcover; a little detail that has me feeling excited and nervous and elated all at the same time. It’s also the first book of mine in 10 years to feature only a historical time and place. But you know what? It’s the way the book needed to be. I didn’t want to force a contemporary overlay where a second story wasn’t needed just to stay in the dual-time periods lane. I think you will agree when you read it. And I really am so anxious for you to read it.

I had the rare and wonderful opportunity when I was in NYC last week to meet the graphic designer who created this cover. Her name is Colleen and she deserves the kudos for her work here. Thank you, Colleen. You are brilliant.

This story is about a family — a father and mother and their three daughters ages 15, 12, and 7 — who move to Philadelphia in early 1918 when the dad becomes heir-apparent to his uncle’s very successful undertaking business. They have no idea within months of their arrival that the Spanish Flu will also arrive in Philadelphia. Told in alternating chapters by this mother and the daughters, the story reveals what the deadliest pandemic in history was like, not just for the wife and children of a newly trained undertaker, but for Philadelphia, America, and the world. 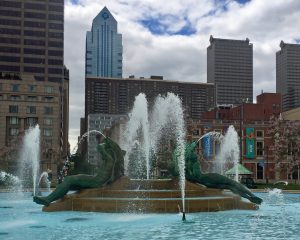 Swann Fountain in Logan Square as it is today. This photo was taken by me a couple days ago. It was placed here in 1924.

I will be telling you more about his book in the coming months, but for now I want to share with you a photograph from last week’s research trip to Philadelphia as I wrapped up the last edits. The fountain at right, which was erected just a few years after the Spanish Flu pandemic, and which sits in beautiful Logan Square (one of William Penn’s planned green spaces from back in colonial times) is the fountain you see on the cover. The young woman represents one of the daughters — Maggie —  in 1925, when Part Two of the book takes place. The butterfly motif shows up here and there in the pages of the story because they are the perfect example of the beauty and frailty and preciousness of life.

I love those little butterflies on the cover, and the delicious font, and the framing with the Gates of Paradise and especially the golden color palette that makes it seem your hand would come away warm if it you laid your palm across the book.

I’m hoping you love this story when you finally get the chance to read it. I won’t lie. The story might make you cry. Probably will. But it’s a story that in the end celebrates the resiliency of the human spirit and the power of love to carry us when we cannot carry ourselves. There will be more on this later, I promise. For now, though, I would love to hear what you think so far. Thoughts?